This month Shyan Selah is featured in Delta Sky Magazine as part of a select group of Creatives from the Seattle area using their talents to do good works. The feature, “Made in Seattle,” was written by award-winning journalist, Crai S. Bower, and shot by renowned photographer, Ian Allen.

Shyan who grew up in Federal Way, WA and got his start in music and entertainment in Hollywood, CA, has always bucked the curve with his unique take on the industry – seamlessly moving between the worlds of creative and business, while fostering a “give-back” attitude rooted in progressive outreach – especially for youth. His uncommon background and approach to music while wearing the hats of recording artist, singer-songwriter, community advocate, and CEO made him a top choice to be featured according to Bower.

“Shyan was my first choice when I was assigned the “Made in Seattle” article,” says Bower. “His talent as a provocative entertainer in tandem with his outspoken positive encouragement of community through music, education and simply by putting himself out there, not only represents Seattle well but exemplifies what’s required from all of us these days. My goal was to include other Seattleites in this article who share Shyan’s belief in using their talents to do good works, whether it’s Alan Lamp of Ballard Millworks creating beauty from fallen trees or Patti McCreary’s “Opt Out” video encouraging girls to quit the appearance game and just be themselves. Basically, Shyan and the other Seattle Makers represent the very best of what this city has to offer in my opinion.” 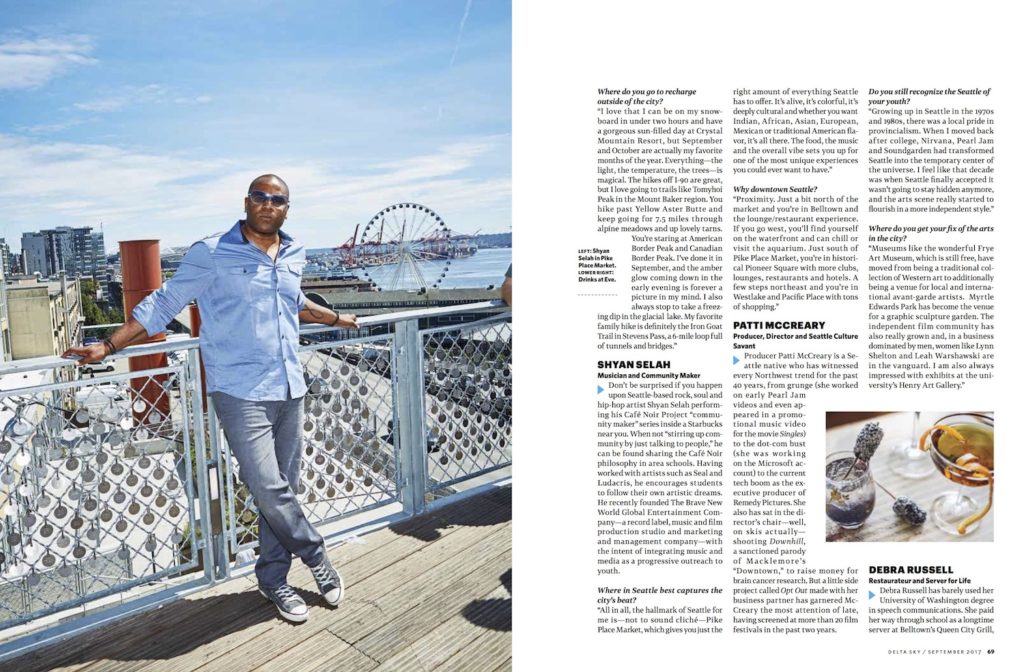 “It was a great experience being interviewed by Crai and doing the photo shoot with photographer Ian Allen,” says Shyan. “I grew up in Federal Way so to be a part of a story featuring Seattle influencers was a nice touch. I love my hometown of Federal Way and Seattle is an amazing city – one of the best in the world. The fact that there’s recognition moving in the direction of my efforts in business and community just makes me smile. I’ve been doing the Cafe Noir Project with Starbucks and others for over five years and have kept it pretty low key. I wanted the community aspect of it to remain pure. I think this article is timely though because it’s now time for the world to see what’s been happening. The music and entertainment business is hard enough but community is deep, emotional, blue-collar work. That’s my style though. That’s what my music and business reflect. It just so happens that I love it with all of my soul and I’m doing everything I can despite the crazy social climate to help move a generation forward and to do so via music. The month of September alone has been a roller coaster with getting my new facility up and going, battling the normal ups and downs of business, and still getting out there on the front lines to deliver something to the public that lifts the human spirit. It’s about making the investment, making the necessary sacrifice, and raising the bar. Those of us that are influencers and leaders of community have to take it to the next level. I am glad I’m not the only one. There’s a lot of good people doing amazing things right now, but it’s certainly a cool moment and a testament to the work to be highlighted in Delta Sky Mag.”

Those interested in learning more about Shyan’s work in the Seattle area and getting a peek behind the scenes of the Delta Sky photoshoot should stay tuned for an exclusive mini-documentary about the experience to be released this week.

Delta’s Sky Magazine is the airline industry’s #1 in-flight publication with over 5 Million readers each month. September’s Issue, Urban Utopia, can be read online at www.deltaskymag.com.

This site uses Akismet to reduce spam. Learn how your comment data is processed.

“BRAVE NEW WORLD” as a concept was inspired by a peculiar notion. A desire to create entertainment experiences that stretch the norm and shatter what’s common. BRAVE NEW WORLD as a brand name resonated with the spirit of that desire and has become more than a name but also serves as the overall intention of this unique Entertainment Company. BE BRAVE is the motto, and this group of progressive industry leaders, are poised to strategically compete for the attention of music and film enthusiasts worldwide.